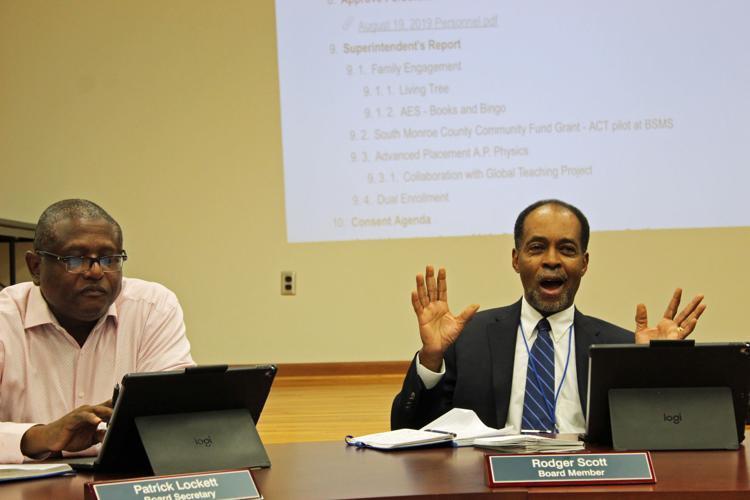 ABERDEEN – Three letters set the theme for Aug. 19’s Aberdeen School Board meeting as matters involving the ACT test were discussed several times. District officials passed along encouragement for each student in grades eight through 12 to take the ACT before the end of the year, and the community’s help is needed to help nudge that push.

“If we got a 100 percent in reading in the third grade, we’ve got to catch these kids in the seventh and eighth grade rather than handing them iPads and cell phones and turning them over to the coaches and saying, ‘Coaches, run with them,’’’ said school board attorney Nathaniel Armistad. “We need to find our hidden heroes...the kids who are sitting around in the corner getting bullied, the girl who isn’t going to be the homecoming queen, those kids who are reading books, and y’all need to tell these preachers, pastors and everyone else, even the street pharmacists, to get these kids in here to take this ACT, and we’ve got to stop playing.”

He also represents the Jefferson Davis County School District and said that school averages 80 students per time in taking the ACT. Last year, $1.6 million in scholarships were awarded to the district’s graduating class, including one student who entered Harvard University this fall.

“Here’s the epidemic. A lot of young girls go off to college and they wind up working at restaurants half the night because they don’t have the money. A lot of our young boys take limited numbers of hours. In Jeff Davis County, we’ve won three or four state championships in football. We’ve won six in the last eight years, and we just made up our mind it doesn’t make sense for all of our kids to go to junior college when we’ve got LSU and all of these athletes. If you get a 25 on the ACT, Delta State and most of these schools will give you a scholarship.

“In Coahoma County, we went to the state championship in both girls and boys basketball. None of the kids but one had taken the ACT. The next year, we made them take the ACT or they wouldn’t play. We had so many college scouts sitting in the stands,” Armistad said.

The Aberdeen School District was awarded a grant from the South Monroe County Community Fund this summer to help provide for eighth-graders to take the ACT early to give them an idea of what to expect from the test. The district’s average ACT scores are lower than the state average of 17.6 at 15.5 reflective of last year’s junior assessment.

To accommodate a need for course sequencing in math to better prepare students, district superintendent Jeff Clay said an Algebra I class is being taught at Belle-Shivers Middle School.

“We’ve got some dogs in that school over there that can get it, but nobody’s pushing,” Armistad said of Aberdeen students. “We’re not pushing them academically. That doesn’t have anything to do with white folks, black folks; that’s us. We’re not doing what we’re supposed to do to push these children. We are saying they can’t do it, and that’s not right.”

Upcoming dates to take the ACT for the school year are Sept. 14, Oct. 26, Dec. 14, Feb. 8 and April 4, and each date has its own registration deadline. The deadline for the September test has already passed, but there is a late registration cost of $30 in addition to the test’s $52 cost, according to Clay.

“We’ve got some really challenging socioeconomics here in Aberdeen, and there are families out there that really can’t afford this test. It’s nothing to be ashamed of, but it’s time to reach out for help,” said board vice president Patrick Lockett.

“Right now with the kids going to Itawamba, we’re starting to see more excitement because they want to do that, but you’ve got to have the ACT score and you have to have Carnegie units,” Clay said.

In other business, district chief operations officer Willie Brandon briefed the board about required active shooter drills within the first 60 days of each semester. For the first semester, a lockdown drill will suffice, and there will be a larger scale mock drill second semester involving the Aberdeen police and fire departments and Monroe County Sheriff’s Office.

Lockett and school board president Jim Edwards each gave improvement suggestions from things they’ve noticed, and Brandon said he would address them.

“The theory is there to keep the projects running. They’ll be separate, but if you run them simultaneously, you’ll get the benefit of better pricing,” said Dustin Dabbs, who does engineering work on the city’s behalf.

He had conversations with city and school district officials about the energy audit.